AFTER DARK 8 Films to Die For has returned!

This makes me so happy, you have no fucking idea.

Not happy enough to give out prizes or anything because Uncle Bob ain't got that kinda scratch but very, very happy.

That brings us to today's review. 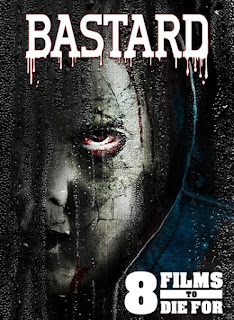 I mean, this movie's got some problems and we'll get to that in a bit but I dug it.  And I'll tell you why.

Also known as The Most Dangerous Woman in Hollywood.  Known for driving a vegetable oil powered scooter, being a raw vegan, burlesque dancing, whip-cracking, fire poi twirling, crotch grinding with an actual metal grinder, Wanting to be a Superhero and showing up on Conan O'Brien to have knives thrown at her.

Questionable dietary choices aside, I adore this woman.  She's not even IN that much but she makes everything she touches more awesome by sheer proximity.

ANYWAY, we're not here to talk about just her.  There's a movie we have to deal with.

So, Bastard (and since it's new, I'm not going to give away too many spoilers) is kind of a less slap-stick-y, non-vampire, slasher From Dusk Til Dawn and I, for one, appreciate the direction it took.

It follows a young couple (of serial killers), their bitchin' (stolen) ride, another young couple ( of runaways who have secrets of their own), a gay (suicidal) cop and Rachael (Tonya Kay) who runs the B&B they all end up at.  Rachael also has a long-term guest that we don't really get to meet.  And a child.  Mommy's just trying to make the best of things now that daddy is gone.

Suffice it to say that the serial killers are not the people you need to be watching out for.

Beyond that, as I said before, this is From Dusk Til Dawn by way of David Lynch.  It goes from serial killer spree to slasher-stalker to straight up WhatTheFuckVille via Crazy Town.  It's odd and quirky throughout but the end is all WHAAAAAA?

Now, this movie has some humor but it's NOT a horror-comedy.  The humor here is strictly used to break up the bleak and bleak, we have plenty of.

Let's talk flaws, though.  What's here, visually?  It's almost perfection.  The order in which the editor placed it?  What... the fuck?  Seriously, do they not teach you people about continuity?  How time needs to basically be linear or people don't know what the fuck you're doing?

And there's a LOT of stuff that really doesn't need to be in the film at all.  Complete non-sequitor stuff.  It derailed the film a little too much and made getting back into the main plot like arm-wrestling a bowl of pudding.

Mostly, though, this is a GREAT little indie horror flick and I appreciated it after waiting so long for 8FTDF to come back.

Grab a snack and go pee now.  Mommy isn't stopping until it's over.
Posted by BobSmash at 2:01 PM