I am SO sorry.  Life has been stupid lately, up to and including recovering from having my tonsils taken out.

Something that should have happened when I was 5.

It was about a month ago and I'm still on a predominantly liquid diet.  This precludes popcorn which makes me very, very sad.


ANYWAY!  You don't need to hear me complain.  You want gore and sleaze and a reminder that you're good enough, you're smart enough and, gosh darn it, your opinions as a horror movie fan matter.

You're not getting the last one.

What you ARE getting is THE BEST VALENTINE'S DAY MOVIE IN THE EVEREST OF EVER!

Because, seriously, kids, Pride and Prejudice and Zombies did NOT get the love it deserved from the press. 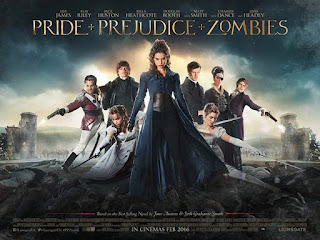 If you're looking for action?  This is for you.

If you're looking for prim, urbane comedy?  This is for you.

If you're looking for a reunion of half of the Game of Thrones cast while George R. R. Martin futzes around instead of writing The Winds of Winter?  This is for you.


If you're looking for girls in floor-length, empire-waist gowns and corsets kicking zombies in the head while exhibiting all of the niceties and manners of the Regency-period upper-middle class while searching for husband material?  This is for you.

If you're looking to be at all scared?

This is not for you.

No, really.  I'm classifying it as horror-comedy because that's what it is.  This should be appreciated along the same lines as Young Frankenstein and Love at First Bite.  It's delightfully silly.  It's even sillier than the book, when it comes down to it, although they left out the part about luring zombies into place with cauliflower (which hurt me a little on the inside).  Scary, though, it is not.  There is not one iota of fear to be found, here.

This, kids, is one of the best "Read a Book" movies I have ever witnessed.  Not only does it give the audience a reason to read THIS book, but it reminds them that there was another source that is just as good (if not better because Pride and Prejudice isn't considered a classic of literature for nothing).  Take something that your normal high-school kid wouldn't touch with a ten-foot pole, add zombies and Voila!  Instant time spent under the covers after lights out with a flashlight and some Twizzlers.

It's dry humor.  So very dry.  Drier than my grandmother's Thanksgiving turkey, but it's not an unattainable level of intellectuality. I firmly believe that movies like this, even though they are SERIOUSLY messed up in terms of what they've done to the source material (but being an iconoclast, I don't care), enhance your education.

That's why this movie makes me happy.

It's not going to win an Oscar but, then again, neither is Leonardo DiCaprio, sooooo...

Go!  Enjoy this frippery!  It's good for you!

(*This post brought to you through the auspices of avoiding profanity for the sake of making a point about period pieces.*)