STOP ELI ROTH BEFORE HE FUCKS UP AGAIN!

This past week has brought me so much pain.

No, I'm fucking serious.  First Fuller House happens, which, by the way, do not fucking pass go, do not fucking collect $200, good LORD that shit was awful.  And then I find out that the goddamn CABIN FEVER remake has already happened and is on my fucking On Demand selections. 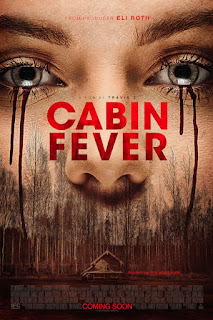 And, of course, like a dumbass with fetal alcohol syndrome, I had to watch it.  Because I thought that there might be SOMETHING that could be done to improve on the steaming pile that is Eli Roth's magnum-fucking-opus.

Just kill me, OK?  I would rather tap-dance on the lip of a volcano in butter shoes whilst trying to fend off the advances of a love-struck orangutan and pierce Queen Elizabeth's clit at the same time than watch this shit again.  But I did it.  For YOOOOOOOOUUUU!

And, you know what?  There's not even a need to go over the plot to this one because I'm PRETTY SURE that Travis Zariwny didn't get enough time off of his Eli-Roth-Dick-Suckin' knees to actually direct a shot-for-fucking-shot remake which means that Travis Zariwny got a whole lot of chapped lips for the easy way into Hollywood as a director, passing off someone else's work as your own.  Eli Roth.  You're supposed to TEACH THEM, not give them the so incredibly wrong answers.

THEY LEFT IN THE PANCAKES KID FOR FUCK'S SAKE!  Granted, they did leave out the surreal karate sequence but, fuuuuuuck, seriously?

No.  NO, children!  I will not stand for this any longer.

Every single person with their name attached to this film should be dragged behind a speeding yacht and used as chum on a shark sight-seeing tour.