YAY!  It's "Horror-Adjacent" time, here at CCRB, and you're just in time for me to get all kinds of nerdy.

Y'see, I know that I never did a post on the original Ghostbusters (and I should have) but there's a very good reason I'm reviewing this one and I'll get to it in a bit. 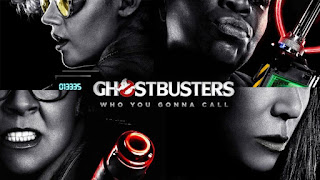 First and foremost, I'm going to say GO AND SEE THIS MOVIE! Because it is just fucking delightful and I heart it much and greatly.  The comedic timing is almost always on point and, yeah, there are some lame cheap shots, but it kept me laughing throughout the whole thing.

Now, the plot?  This is where things get tricky because this is NOT, let me repeat, NOT like the first movie other than the fact that it's an origin story.  The three scientists find proof of the supernatural and band together to research it and, along the way, fight it because there's some malevolent-ass shit out there and a literal conspiracy to unleash it.  That's really all I'm going to tell you about that except to say that this isn't your parent's Ghostbusters.

I have to say that I am NOT a Paul Feig fan but he took this source material and ran with it.  He gave us four very new and different and, frankly, FANTASTIC female leads and a story that was as much a loving homage to the original as it was a whole new entity of its own.  These ladies have definitely earned their comedy chops and I can't think of anyone better to play these parts.  I was INTENSELY happy to see my beloved childhood memory treated so respectfully and that it was just as goofy as the first.  I was also pleased to have a movie out that promoted STEM in general, and to girls specifically (even though I do not believe in the paranormal, there's no reason not to study it and make sure that it's not real).

Remember that "good reason" I talked about up there at the top?  Let's talk about why this movie was so controversial for a minute.

People ragged on this from the start when they learned that it was going to star women instead of being a clean remake with men in the roles we all know and love from before.  There's no reason why we shouldn't have that clean reboot but the sheer amount of vitriol surrounding these actresses and how they were "going to ruin our childhood" was disgusting.  There were actual plans on Reddit (granted, set up by trolls which got SERIOUSLY out of hand and, no, I will not link it because the behavior of these sexist pricks is horrific) to tank this movie ONLY because it starred women instead of men.

As I've said before, I will always judge a remake or reboot on its merits.  There are some remakes I don't want to be made because I think there are some things that don't need to be remade but I don't have a problem with them, in general, and seeing the new perspective is sometimes refreshing.  In this case?  I was iffy, I'll admit, but I also wanted the franchise to continue and it had been too long since the concept had been touched so I was OK.  This remake got some HATE.  And we're not just talking about jerks saying "OMG, this will totally suck," I'm talking legit death threats and shit, again, because the stars were women.

That is some fucked up shit, yo.

If you feel the need to dog on a movie because it stars strong female characters, you need to get the fuck up off my doorstep because I do not play.  It's attitudes like this that made sure that Black Widow and Gammorah got shut out of the merchandising for Marvel's Avengers and Guardians of the Galaxy and we didn't see any Rey merch for Star Wars: The Force Awakens until the movie came out (which the studio blamed on "spoilers" which we all know is a crock of shit).  You know what, dickbags?  Girls are allowed to have action heroes, too.

And, there were also some questions about race.

Leslie Jones' Patty is perfection, even though she's been hailed as the most racist of the new characters but there's really only one instance where race is even called into question.  Yes, she's a bit stereotypical but so is a damn Medea flick so why don't we just let her have her cultural mannerisms since her character is legitimately attempting to better herself by joining with the scientists in an effort to learn about the apparitions that are haunting her subway on her own damn time and outside of the authority of her bosses rather than just being "sassy, black woman".  Personally, I was afraid this would be a problem but it really wasn't.  The trailer lied to us.

The trailers lied to us about so many things.  None of the trailers were what I'd call good trailers.  Ignore the fucking trailers.  Go watch this and laugh your ASS off.  I did.  Stay through the credits.
Posted by BobSmash at 6:20 PM