So, after the long and complicated bit of mental juggling required to tell myself that Lauren Cohan's breakout piece The Boy wouldn't suck the chrome off of a trailer hitch, I sat down to watch it. 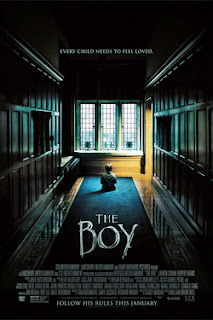 Basic premise:  American woman named Greta straight up becomes an ex-pat to escape her abusive ex and lands a very lucrative job babysitting a doll.  Yes, you heard me right, a damn doll.  A very proper young doll whose parents love him dearly and there are rules that have to be followed very precisely or the whole damn day is just wasted.  Because very proper young dolls don't like to have their routines interrupted.  And then things just get all freaky-deaky up in here.

I suppose you should be warned right now that the statute of limitations for spoilers HAS passed.

So, the movie starts out as just strange.  Like there's almost no lead-up at all.  She drives to the house, immediately trespasses and gets found by the handsome local grocer who, for some reason, has a goddamn key (we'll talk about that more in a bit) and THEN gets introduced to the family which, of course, means meeting the boy, Brahms.  The rules are explained to the young woman and the family leaves the next morning on holiday which hadn't been possible for the last year or so because they kept losing nannies.  You know something is going to go horribly wrong when A) you bought the ticket to a horror movie and B) the lady of the house hugs you tight, as if you were her own daughter, less than 12 hours after meeting you and whispers "I'm so very sorry" in your ear as she steps out to the fucking chauffered Bentley.


Now, I think I need to step in here and say that I'm really tired of this whole meaningful name tropiness crap.  A toddler should not have to have a degree in Classical Music to be able to understand their own name OR to say or spell the names of others.  Personally, the kid's name alone is just begging for trouble.  You know what name is good for not raising a haunted doll?  Steve.  Name the boy Steve.  Or Paul.  Or Joe.  Brahms is some straight-up "I need my home life to be fucked up" bullshit.

ANYWAY!  Back to things and such.

So, yeah.  The new girl.  Alone in the house.  Weird shit happens.  She has bad dreams.  We get exposition about her ex and her clothing ends up missing or strewn about because Brahms is unhappy that she blew off the rules to, y'know, live in a gorgeous, if somewhat run-down, mansion with a wine cellar the size of Paris Hilton's colon and a fucking doll.  Then she gets trapped in the attic.

Yeah, the grocer...  who has a key... and with whom she is most definitely not going on a date because she just got out of "a thing"... finds the house locked and the woman who does not have a car and can't really go anywhere is not answering the door (but IS legit trying to bust up the attic window and screaming bloody murder out of what is, for all intents and purposes, an open window) so he leaves.

There wasn't even a "Hey, what happened" thing, there was just a "I know you were here but I was locked in the attic, YOU HAVE TO SEE THIS!!"  where she figures out that the doll is haunted and goes to show him.


So, she decides that, yes, the rules need to be followed, no, she can't go out on a date with the handsome Limey, and Brahms will officially be the surrogate for the baby she lost due to the abusive ex.

And then shit gets fucked right the fuck up because guess who shows up?

If you said "The Ex" you have won.  You've won nothing because in any horror situation where the woman has been abused, if he hasn't shown up by the third act to cause trouble, the director is doing shit wrong.

Anyhoo, this is where the picture went off the rails and took us from "somewhat funny and delightfully spooky haunting" to full-on "The People Under the Stairs" craziness.  I don't have a problem that the doll wasn't actually haunted.  I have a problem with the transition from "supernatural" to "insane burn victim living in the walls a la Hugo fucking Simpson".  It could have been done well.  It was not.  It was kludgy and wrecked any sense of timing the movie had.  It feels like the director wanted to divorce any kind of "Hammer Films" vibe from the movie altogether.

I mean, it's not completely horrible and straight-up gaslighting a young woman into caring for a doll like a child aside, had they left the film as a "woman going slowly mad" piece, I would have been OK with it.  It would have been slow and beautiful but that's OK sometimes.  Instead, we got "super-strong Billy Lenz" and his parents giving him permission via suicide note to do whatever he wanted with poor Greta.  And, they left this shit open for a damn sequel.

Greta's gonna have some mental scarring and probably never be OK with any kind of relationship again.  It's probably better that way.  I can give you the names of a few awesome cat shelters, Greta!  You know... for your crazy cat lady starter kit.