And rarin' ta go.  Sorry about the sabbatical.  I just needed a break. 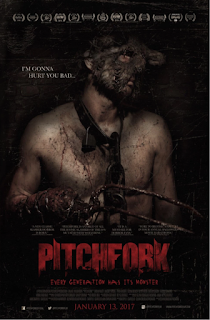 Glenn Douglas Packard gets it.  He really does, but this one needs some fuggin' work.

First off, the problem is that he DOES get it.  He knows all about the slasher tropes and how to play them.  We get it.  If you have sex, you die.  It's totally a thing.  Considering, though, that your story starts with "gay boy goes home to deal with his family after coming out", you might want to steer more toward the sex-positive thing.  Ooooh, and the pitchfork for a hand.  That's... interesting...

Next, kiddo, we need to talk about your pacing.  There are WAAAAAAAYYY too many points in this flick that need to be pared down.  There's the 10 minute "walking the dog" vignette at the beginning.  The 7 minute choreographed dance number.  No, seriously.  There's the 10 minute psuedo-rape scene with the girl above that just made me want to kill her myself and save us the time.  It's too much.  Edit.  You pay your editors to edit.  Let them do their job.

Finally, how the hell did our main character live next door to the killer and know the killer when he actually lived in East Bumblefuck and NOT know that he was being physically and sexually abused to the point where he was basically a trained dog?  That's a huge fucking plot hole.  And how did the precocious little sister know that he could be ordered around like said trained dog?  I get that you said that she was "the animal whisperer" but dude's not a horse, he's a warped motherfucker with a pitchfork instead of a hand.  Come on, Now.

Add to this the "coming out tropes" (with extra "be a man" added), the "I'ma be besties with the girl that fucked my boyfriend because she proved to me that he was a player by just saying so," and FOR FUCK'S SAKE THE MUSICAL NUMBER IN THE GODDAMN BARN, and you've got what could have been a disaster.

Thing is: it isn't.  It's actually not a bad piece.  It has faults but it's not a bad way to spend a couple of hours.  It's strange and very amateur-hour but for a first effort, it could have been way worse.

I say give it a shot if you're bored.