This is a "reprint" of an article I wrote for Ultimate Gore-a-Thon a while ago.  Sit back.  Relax.  Feel the snark.  BE the snark.  Let the snark wash over and through you as we dive into Alexandre Aja's remake of The Hills Have Eyes... 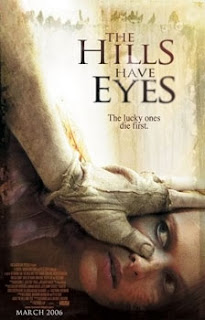 So, we fans know the story.  A family is on a road trip.  They show us a fairly standard amount of dysfunctionality which is to be expected when you're trapped in a gigantic moving trailer for days on end.  I consider myself lucky that my dad never got a Winnebago.  I have 4 siblings.  If we had a camper, at least one of them would have be dead by now.

They're bickering their way through the desert and they stop for gas.  Shady gas station dude tells them to take a shortcut.  Why do they always take the shortcut?  The shortcut leads to the painful stabby death, people!  NEVER take the shortcut.  If you have to WALK a hundred miles out of your way, and there's a shortcut, you better start hoofin' it.  Shortcuts bad. 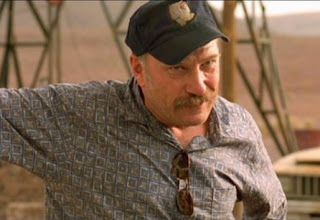 Look at you, Buffalo Bill.  All sassy and shit.  Tryin' to take a shortcut.  Dumbass.

Yeah, so, in the course of the ill-advised shortcut, they hit a strip of tire spikes which just about kill the family as the Winnebago comes to a screeching halt.  Uh-oh.  Family be boned.

Dad leaves to get a tow truck.  They're not THAT far from the gas station, I guess.  Everybody else just gets comfortable and waits.  One of the dogs gets loose and the son has to chase it.  When he finds the dog's gnawed carcass (because that's the BEST kind of carcass), he tries to run back but slips and falls because in every horror movie, ever, somebody has to fall and leave themselves vulnerable to the stabbiness.  Oddly, though, there is no stabbing.  Just Ruby, one of the mutants that live in the hills (heretofore referenced as “hill mutants”... because what the fuck else are you going to call them?), looking at him bemusedly while her brother has a Scooby-Snack.  Yes, I meant he was eating the dog. 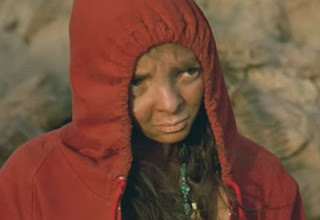 In the meantime, Dad gets to the gas station.  Shady dude is having a conniption and Dad gets, rightfully, freaked out.  Shady dude ends up killing himself and Dad gets captured by the hill mutants.  A little later, one daughter is almost raped, Bob is tied to a tree and set on fire, then daughter DOES get raped, Mom gets shot, other daughter gets... nursed?  Really?  Dang.  There's some fetish-y shit right there.

Anyway, after the nursing, she gets all self-defense-y and stabs one of the mutants with a screwdriver and gets shot and her baby gets kidnapped.

I could go on, but, really?  The fans have seen this already.  Unless you are one of those people that is going to completely toss a remake out on its ear BECAUSE it's a remake, in which case, I don't feel bad for you.  This is a lesson in taking any film and judging it on its merits and this film is kind of amazeballs.

Aja knows his shit.  Even his cheesy-ass remake of Pirahna was hilarious and that's because he meant it to be.  He's a fan who made it big and, as such, is a force to reckon with.  He gave us a polished version of Wes Craven's original vision and, while I'll always love Michael Berryman and his creepiness, there's a whole lot more to these hill people than meets the eye.

As we all know, cannibal clans are relatively well-received in horror pop culture and they have been for centuries.  They've been used in films from the original The Hills Have Eyes, to The Texas Chainsaw Massacre to Chernobyl Diaries.  In this vision, they represent that asshole-ish kind of Tea-Party, anti-gubmint, “ain't nobody can take my land” sort of American that has become a farce and is basically the reason that every other country in the world hates us.  I swear, if Canadians weren't drowning themselves in poutine and maple syrup and being all polite and shit, we'd have a problem. 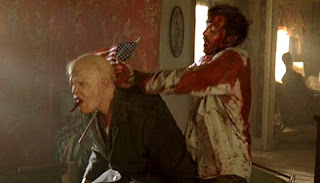 And that's what some of us would love to do to Sarah Palin.

The transformation of the Son-in-Law from hippie to warrior to protect his family is indicative of the rest of us trying to save the country from Tea Party extremism.  'Cause those guys just suck.

That's what it looks like to me, anyway.  But, then again, I could be talking out my ass.  All this symbolism could be me trying to attribute art to b-grade schlock but your mileage may vary.  I'm what you like to call an “insufferable know-it-all”.   It comes in handy when you spend a good portion of your day giving your opinion to people.

In any case, I enjoy how the action's been ramped up.  I like how the monsters are engines of violence mimicking the violence that created them.  I like how Ruby is the black sheep, actually kind of caring for and protecting these new people and not wanting them to get hurt.  I like how this ends up being the team-building exercise from Hell and I like how Aja presents it to me.

So that's my two cents.  I welcome yours.  Mostly because I'm broke.