So, I've been waiting for XX to come out for a while now and YAY!!  It's here!

Because, you all know how much I dig an anthology. 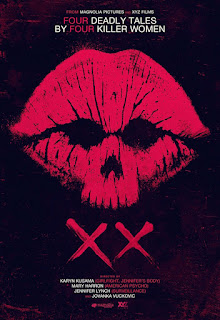 And you ALSO know how much I dig feminist roles in horror and this gives us a whole lot of them at once because each segment, and the wraparound, gives us an intensely feminine viewpoint while not shying away from terror.

The Wraparound follows a creepy dollhouse looking for a heart for its little girl.  Its journeys tell us some of what we're about to watch but, really, this is a film on its own and Sofia Carillo should be DEEPLY applauded for her work.  It was chilling and beautiful.

Segment One: The Box.

Never in my life has a fucking MacGuffin been so maddening.  This is worse than the briefcase in Pulp Fiction and the trunk in Repo Man.  This tale of a child told a secret... an INFECTIOUS secret... while his family, particularly his mother (Natalie Brown of the US version of Being Human), struggle to know and understand why it's affecting them so deeply.  The mother who is seemingly detached and judged not worthy of the knowledge but would give her life to make sure that her family is taken care of.  This one is haunting.  I like it a lot.  Jovanka Vuckovic is going places.

I LOVE this segment!  I think it's fuckin' brilliant.  A well-to-do mother (Melanie Lynskey, best known as Rose from Two and a Half Men), preparing for her daughter's birthday party finds her husband dead in his office.  She spends the remainder of the short trying to find a way to hide the body amidst a boozy assistant who was likely fucking the husband, anyway, nosy neighbors and a rapping panda.  It occurs to me that medical marijuana could probably be a more stable form of currency than actual money.   Anyway, this is just a little horror.  A lot comedy, but a little horror.  I think it's fucking adorable and says a lot about what a woman will do to keep her family happy.  Annie Clark (better known as musician St. Vincent) did a great job for her debut.  I look forward to seeing more from her.

Four friends go camping in the desert and awaken an ancient, petroglyphic evil.  That's, ahhhh... that's it, really.  To be honest, this is my least favorite of the three.  It's a straight-up monster flick and while it's well done, for what it is, and gives us normal people (and normal LGBT people who are NOT shown to be oversexed perverts), it's just a monster flick.  Decent effects, mostly practical, so that gets a nod but there's nothing overtly feminist about it.  It feels super-short, there's less explanation as to what's going on than in The Box and no mystery to back it up, really, and there's no statement to be made other than: "Look!  Women can make monster movies, too!"  It's OK.  It's just not... good...

Segment 4: Her Only Living Son

A mother of a young man on the eve of his 18th birthday has to come to grips with who her son is and what he is meant to be.  I have mixed feelings about this one because I feel like it shot for the moon but hit the neighbor's dog.  So, while it did accomplish something (the acting was wonderful, the story itself had merit and it was a somewhat refreshing retelling of a story that's as old as at LEAST The Bible, if not Rosemary's Baby), I don't think it did enough.  I feel like it could have gone deeper and darker.  I think the problem here was the time limit and that they had to fit the whole story in and make it have pathos whereas if you try and shoehorn all of the changes this kid was going through in a montage sequence, you get a parody real quick.  It's good, but it could be better.

All in all, this is very deserving of a watch.  I can't even snark at it, so, take that as you will.

And call your mother.  She worries.
Posted by BobSmash at 1:45 PM