M. Night Shyamalan is back with Split.  And I watched it. 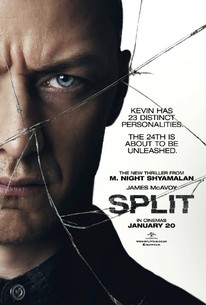 Great acting I got.  The storyline?  Not so much.

So, our story is about three young women who get kidnapped by a man who has developed 23 distinct personalities due to childhood abuse, collectively known as "The Horde" because there's, apparently, nothing more frightening than a World of Warcraft reference.  We get McAvoy cycling through a few key personalities in an effort to bring forth "The Beast", which is the new 24th personality.  This one is a cannibal.

Luckily for us, one of the girls is ALSO an abuse survivor and gets her mad on to try and help the others.  His shrink is also on the job, not quite knowing if he's behind the highly publicized kidnapping or not but pretty damn sure since one or more of the personalities are fighting back and bringing him to see her daily to try and mitigate the damage.  And I literally mean damage because the shrink has a hypothesis about the personalities having their own physiologies alongside their personalities, such as only ONE of the Horde having diabetes.


None of this is really helpful.  It's too new so I won't give it away.

I mean, give this a watch if you want but I just did not care for it.  Frankly, Shablamgela's career should have been over after Avatar.
Posted by BobSmash at 8:09 AM