We Hurt the Ones We Love. LET ME LOVE YOU!

My roommate has been hounding me for MONTHS to watch his new favorite movie, The Love Witch.  I finally gave in but only because I like my roommate and I also like mid-to-late-60s retro Technicolor schlock. 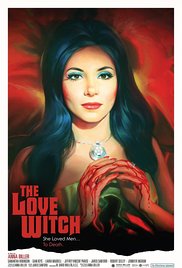 Anna Biller's latest, The Love Witch, is a throwback to films like Hammer's Dracula, Blood and Black Lace, Black Eye, and Barbarella.  Super-saturated with color, marinated in pure sex, and melodramatic to the extreme, these films are EXTRA-cheesy and I love the fuck out of them.

Elaine, our lead and played delightfully by Samantha Robinson, is a recent widow/divorcee/not-really-sure fleeing from a past she'd rather forget but also starting to weave her own little web of debauchery in her new digs.  Digs where her old coven seem to know exactly where to find her at all times.  (This is important, somehow, but I still haven't quite placed my finger on it.)

Her schtick?  She's addicted to love.  Like a reject from a Robert Palmer video, she gives us garage-door eyeshadow and a tasteful coral lip to get what she wants and what she wants is a man to love her forever.  Except she keeps getting it wrong and either having to kill them or just watching them die.  Horribly.  Not in the way of "Oh, that death was gruesome", more like "Oh.  No.  I'm.  Dying." hilariousness.

During the course of this, the police are catching up to her, she falls in love with the lead detective and all kinds of wackiness ensues.  Like rituals:

And impromptu horseback riding that leads directly to a pop-up renaissance festival starring all of her coven friends that are itchin' to hold a wedding for the two people that literally started dating a day before.

For real kids, this is some DELICIOUS cheese.  Like a fine aged cheddar or smoked brie.  Biller obviously knows and loves her schlock and I need to meet her and thank her for this.  Mostly because I watched it reeeeeealllly fucking high (weed is not a drug, it's a plant) and that's the best way to watch it.  You don't need acid to feel like you're hallucinating.  Just some skunk weed and this movie.  Fantastic.

I may have to give this one a try sober but I feel that I may have been spoiled myself for choice this time around.  I think it would still be fun but not AS fun.  Still, this is one of the best instances of unintentional comedy-horror ever made.  (The director prefers that it be known as a melodrama but she's wrong.)

Anyway, bust out those go-go boots and fringe dresses, spark up a blunt, get yourself some munchies and check out The Love Witch.  You won't be disappointed.
Posted by BobSmash at 4:53 PM