The following is a sneak peak at the first chapter of TROPEFEST II: Return of the Killer Cliches. The format of this article will likely not be the same as in the book because I can't afford the rights to the pictures.   Enjoy, bitches.


From the beginning of storytelling time (or at least back as far as Edgar Allen Poe), there has always been that one villain that is so utterly unhinged, so deranged, so apathetically mean, that their actions, regardless of the payoff at the end, are cruelly random and absolutely unreasonable.

These characters, as TV Tropes so eloquently phrases it, are doing this “for the evulz”.

This portmanteau of “evil” and the internet slang “for the lulz” basically means “I don't need a reason to do what I'm doing, I'm evil. Suck my dick. And this stick of dynamite.” Kinda like the Trump presidency. Fuck you, Trump.

We have to bear in mind that this doesn't have anything to do with a similar trope in which the character just does something because it amused them (see the home invaders in The Strangers). In this case, the character is in full fucking possession of their morality and they deliberately choose to perform acts of evil based on that trait alone. One more time for the folks in the back, the Trump presidency, ladies and gentlemen.

Whether or not the character gets any actual enjoyment out of their actions is also questionable. They don't NEED to enjoy dangling your scrawny ass over a shark-filled aquarium with a laser pointed at the rope holding you there while waiting for whichever tights-clad paragon of fucking virtue (nerd) to show up and rescue you, but it's sometimes nice, I suppose. No, they do it to inflict their own suck-ass life on you to share the pain. They do NOT give a shit if their actions hurt them, too.

There is also a sub-trope of this where the villain is an actual personification of evil. That's where we're looking at characters like the Loc-Nar (not a person but sentient, it counts) from Heavy Metal, Evil (yes, that's really the name of the character, thank you David Warner and Terry Gilliam) from Time Bandits and, in a kind of lame-ass attempt to explain how he comes back every few years to torment Jamie Lee Curtis, Michael Myers from Halloween.

Now, as I said earlier, this trope does go back to at least Edgar Allen Poe. The Black Cat gives us a protagonist who hurts people and animals out of the “spirit of perverseness”. This didn't just extend to the people and animals he harmed, it also encompassed himself. He just didn't care and was driven to do things that he KNEW were wrong and did them anyway, seemingly out of pure spite. He hanged the titular kitty because “I knew that it had loved me, and because I felt it had given me no reason of offense; hung it because I knew that in so doing I was committing a sin “

But we also have characters like EVERYBODY'S favorite Batman rogue, The Joker. Not only does he do things specifically because they're funny but he tries to wax all philosophical about it and shit. In The Killing Joke (now an animated feature), he (SPOILERS, BITCHES!) shoots Barbara Gordon (AKA Batgirl), paralyzes her, and kidnaps Commissioner Gordon, strips him naked (Well, hello, Daddy...), and tortures him with photographs taken of Barbara's broken, nude, helpless body. It's assumed that J-man raped her but that's not canon. Why did he do this? Because it's fun AND because he wants to prove that all it takes is one bad day to utterly ruin your life and make you take the short bus to cuckoo-town. 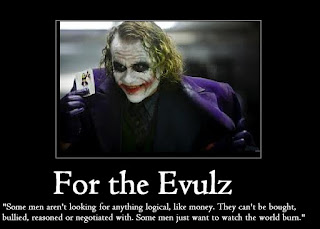 And in video games, we have the myriad of games wherein you, the player, get to decide if you're going to fight on the side of the angels or wreak havoc because you can. Infamous is pretty much the forerunner, here.

In horror specifically, we do have the aforementioned Michael Myers (although he doesn't seem to enjoy it, he DOES take the time to artfully display his victims like some kind of demented Macy's window dresser) but we also have such interesting characters as The Captain in Byzantium (who seems to just like raping little girls and sending them off into slavery), The Gremlin in Twilight Zone: The Movie (and the television episode Nightmare at 20,000 Feet) who just wants to destroy the plane because it's all kinds of fucking funsies, and the Indomitus Rex from Jurassic World who, for all intents and purposes, is a giant, dinosaur sociopath. It hunts for sport, unlike the other big bads in the previous installments.

This trope is SUPER fun but it can also go down some idiotic fucking roads. If you play it too far one way all you have is a cackling, petty, dumb-ass super-villain that's too stupid to live (and won't... because they're stupid). If you don't play it up enough, all you get is “Doomsday Guy”. Laziness is usually the cause, here, and it tends to happen in sequels because, as mentioned in the my first book, screenwriters do not understand the care and feeding of cash cows. I find that smacking them with a newspaper generally gets them to stop shitting all over the paper.

Email ThisBlogThis!Share to TwitterShare to FacebookShare to Pinterest
Labels: for the evulz, horror, snark, Tropefest