Sorry about yesterday, kids.  Due to circumstances beyond my control, I got lazy and didn't want to hunt down a computer.  Today, though, to make up for it, there will be an extra long post.  First, as promised, is the review of the 2006 remake of Black Christmas. 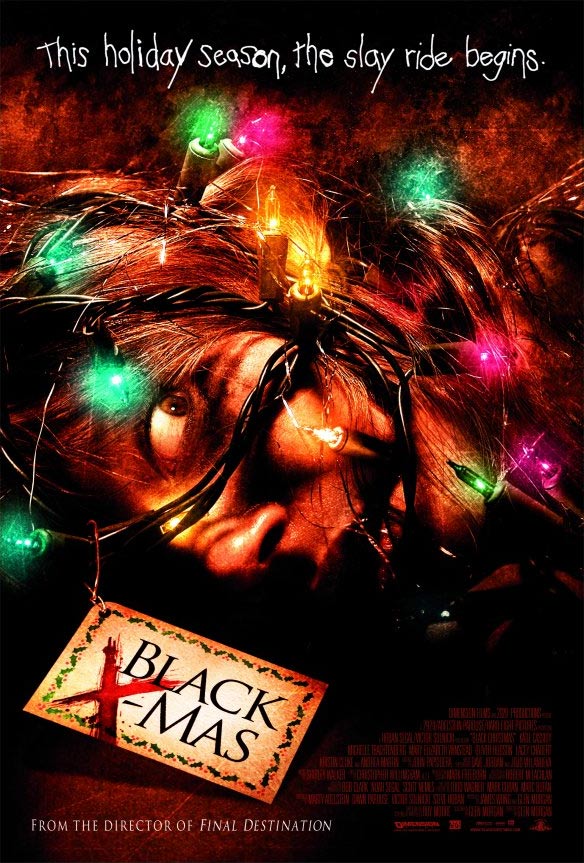 I know a lot of you kind of hate remakes and I don't blame you BUT, and this is a big but (much like my own), they aren't always a bad thing.  We'll discuss that later.

Let's get started, shall we?

In 2006, I was recovering from a serious downturn in my life and I spent a LOT of time at theaters alone.  To the point where I actually LEFT a holiday party to go and see this on opening night.  I had been looking forward to it for a while, ya see, and I often forewent social niceties in favor of me time.  For anyone that knew me, then, I'm very, very sorry.

In any case, I really think that instead of calling this "Black Christmas", they should have called it "Let's see how many times Lacey Chabert and Michelle Trachtenberg can drop the F-bomb in a misguided effort to drop their cutesy-wootsey little sister TV images".  Beyond that, though, it was a lot of fun. 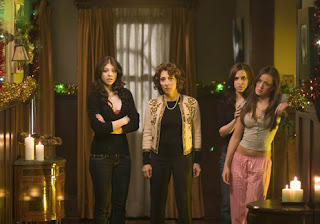 Fuck you, and fuck you and especially fuck you.  Merry Fuckin' Christmas.
Also?  Andrea Martin After: With Decent Hairstylist Kung-Fu Grip

So the premise is about the same except they streamlined it for a modern audience.  Nobody's concerned about an abortion and there's absolutely no ambiguity about who the killer is/killers are.  There's none of this pussyfooting around with "is it the boyfriend or isn't it", we actually have a legitimate outside force.  HOORAY!

Enter Billy Lenz.  The physically and sexually abused (and very possibly jaundiced) former occupant of the house AND his (also jaundiced) sister/daughter Alice.

Better watch out.  He LOVES Christmas.

Y'see, Billy really likes the holidays.  No, wait... he actually kind of doesn't.  His alcoholic mother killed his father on Christmas.  Then his alcoholic mother tried to kill him but, like any well-prepared boy of the mid-80s, he already had hiding spots in the walls and attic so he lived there for quite some time.  And then, one Christmas, his mom gave him a very SPECIAL Christmas gift.  Her meat flaps.  Because mom was all about keeping it in the family and she wanted another kid that her current husband couldn't give her.  Pay no attention to the fact that she was at LEAST in her late 40s at this point (or at least she looked like it). 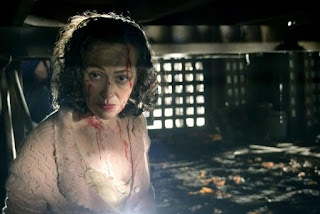 And this was after she killed the FIRST husband... girl is OLD!

After years of this (at least to the point of his sister/daughter turning 8 or so, Billy finally wigs and kills everybody (except Alice, whom people THOUGHT he killed but he didn't) and he gets caught making christmas cookies out of his mom's beef-jerky-like skin.  Personally, I didn't think cookie cutters were that sharp but we're talking about a kid that lived VOLUNTARILY all People Under The Stairs style for over a decade.

So, anyway, Billy, in true b-movie fashion, stabs his guard at the insane asylum (what exactly are we calling those now?  Not sanitariums... mental health facilities?  Why does being PC have to be so fucking wordy?) with a candy cane he sucked sharp (and who didn't do THAT as a kid) and takes off for home.

It's pretty standard slasher fare from here on out.  Killer in strange wardrobe goes about killing sorority girls (for fans of the original, the plastic bag and the unicorn are kept in... YAY).  Slasher ultimately gets killed.  Daughter of slasher survives to take over the family business after saying that all of the dead people are her family now...  OK, so it's not standard but at LEAST we get to see Andrea Martin get impaled with an icicle.

Oddly, though, the sex trope I told you about?  Inverted here.  None of the girls but one are shown having sex and it's the one who not only has sex, but her boyfriend taped it and posted it online, that survives.

So, anyway, this one is a little jumbled but it's not NEARLY the cluster that the original was.  I recommend this one for your holiday enjoyment.

Now... as mentioned previously, we're going to talk about remakes.

I have gotten into some DAMN heated arguments about remakes and all I have to say about that is this.

Seriously.  If the studios weren't in this business to actually make money, we wouldn't be having this conversation right now.  That being said, they know that horror has a built in audience and that a lot of the movies we consider to be classics sometimes really do need a facelift.  Some movies just do not age well and our grindhouse favorites are among the most needy.

See, here's the thing.  Remakes are made to make money on a franchise and to maintain copyright on original characters, we know this, but, often times, the director assigned to helm the remake still has a passion for horror and knows and respects the original for what it is.  These directors are the "best-friend-step-parent" of fandom.  They know they will not replace our original favorites but they want to build a NEW relationship with a whole new generation of fans who, I'm sorry to say, will likely NOT enjoy the original, particularly in the case of some of the older fare such as Texas Chainsaw or even Black Christmas.

We didn't grow up in the age of the MTV quick cut edit.  We had to have patience in our film-making and had to sit through sometimes MINUTES of unnecessary exposition.  Heavens.  Poor us.  But don't hate the younger audience for enjoying what is in their nature to enjoy.  That's like hating a dog for being able to lick its own nuts.  Rather we should continue to enjoy the originals and try to view the remakes as separate entities.  (Of course, this is barring those remakes that are shot-for-shot updates, like The Hills Have Eyes.  Those kind of scream "COMPARE US!")

If the remakes suck, call them out on it but there's no reason to say "remakes suck" just for the sake of them being a remake.

That being said, where the fuck is my big-budget remake of Frankenhooker?!?

I want it NOW!

My name is Veruca Salt and I approve this message.
Posted by BobSmash at 12:31 PM