At a friend's request, I just watched Night of the Creeps again.  I TOLD myself I wasn't gonna do it but I suppose I have to be fair about these things.  And now, there are 90 minutes of my life that I'll never have back.

Not that I'd want them because I'd probably be a dumbass and watch this hilarious piece of trash again. 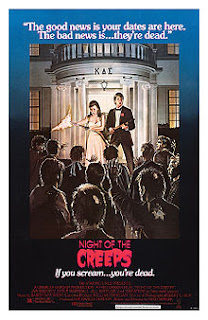 It starts high above the planet in a spaceship with very low ceilings and naked alien toddlers trying to keep their balance and not fall on their collective butts in a cute yet menacing manner (that would probably end up on YouTube and get a million hits while this site gets bupkis... nobody respects intelligent humor, anymore) while also attempting to stop one of their crew from releasing an experiment.  Obviously they fail and we never hear from them again 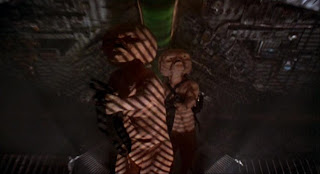 On Earth (circa 1956), a skanky ho broke up with her cop boyfriend and is now dating a bad-ish boy with a convertible.  He takes her to "the point" where they stare at the stars and bad-ish boy tries to keep his erection hidden but they get told to hit the bricks, scram, vamoose by ex-boyfriend cop.  She has all the feels for a minute and goes to wish on her star when her star turns out to be unknown space junk... see where this is going, yet?

New boy wants to investigate.  Leaves skanky-ho alone while he goes to find the space junk.  The space junk, a la The Blob or The Stuff turns out to contain brain-eating slugs from outer space.  Which is the name of my new fragrance.  Brain-Eating Slugs from Outer Space... it's cosmically hypnotizing.  Only not.  I have allergies.

ANYWAY...  skanky-ho, in the meantime, is listening to the radio and, in true slasher fashion, gets hacked at by an escaped lunatic.

Fast forward 30 years to two guys at college looking to get laid.  Well, one is, J. C., but he's Gimpy McGee and he's just grateful he gets to leer.  The other kid, Chris, is all nervous and there's this one sorority girl he's kinda gaga over but she's got a boyfriend.  Chris says, "Hey!  If I join a fraternity, she'll bone me!"  In order to JOIN the frat, though, they have to steal a corpse and leave it on the lawn of another fraternity. 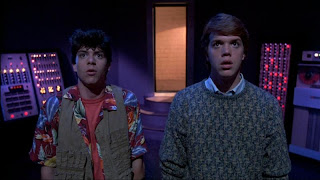 So, yeah, in the midst of all this hot B&E action, they find a corpsicle (and, yes, they actually use that word) that's all handy and available and they set it free from the confines of it's cryogenic prison.  It twitches wrong and they run from the premises, "scleaming rike banshees".  Yes, that's actually a line, too.

Cynthia, otherwise known as Cindy-Lou Who, who apparently has some assertiveness but not a lot of it, is getting ready for bed and flashes us a pair of A-cups ( not that I care but I know guys that do) before opening the window to see our flash-frozen friend at the window spitting slugs.  This leads us to think things through the movie that just aren't true.  Things like "My she's quiet.  I bet she's got a head full of brain slugs."  LIES, I tell you.  She makes friends with Chris and J.C. after that.

So, yeah.  Explode-y-head corpse gets found and J. C. and Chris are brought in for questioning.  Oh, did I mention that the detective working on the case is Ex-boyfriend Cop?  Yeah, he's taken a few loops around the bend and he reads entirely too much Dashiell Hammett.  Nobody cares about film noir, anymore, you hack!  Anyhoo.  He's following the boys and Cindy-Lou Who when J. C. leaves to give the burgeoning lovebirds some time alone and gets attacked by slugs in the bathroom.  Because that's the BEST place to attack a kid with crutches and an unfortunate addiction to 40s style dialogue. 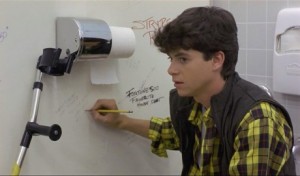 Excuse me, you're interrupting my graffiti time.

So, after Chris drops off Cindy-Lou, the cop corners Chris and brings him back to... his house?  Turns out he killed the loony that chopped up his ex and buried him under the sorority's house mother's house.  He tells this to Chris as if there's a statute of limitations for murder even for a cop.  I'm kinda hoping that Chris charged him some blackmail but Chris is stupid so probably not.  While Cop is spilling his guts he gets a call that the den mother's been killed.  He grabs his trusty 12-gauge and sends Chris on his way to... get... a tux for the formal tomorrow?

So... the cops find the walking loony corpse and said looney gets a head full of slugs and tears apart the old broad.  The cops chase him down and discover the brain slugs with a head shot. 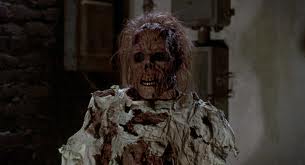 Yeah, that's a face that begs for a kickin'.

Chris finds a tape with J. C.'s last message on it that tells him about the brainslugs and how to destroy them.  Chris, who wisely does this BEFORE his date but unwisely AFTER he puts on his tuxedo with, if you can believe it, a skinny BOW-TIE (yeah, I know... idiot yuppies and their obsession with all things thin), takes a trip to the basement where he finds his friend and a handful of melting brain slugs.  Then he goes to Cop and tells him all about it and they "requisition" a flame thrower and storm the gates of the sorority house where the brain-slugs are nesting.

The sorority house is currently teeming with frat zombies... actual zombies, not how they normally are.  It takes destroying Cindy-Lou's smart-ass exwith a bullet to the brainpan and a dousing with a flame thrower for her to realize she's been holding hands with the infected and trying to convince the corpse she needs to move on.  Somehow, she ends up with the flamethrower and she does a darn good job with it.  Blah, blah, action sequence, an interesting use of proto-bullet-time and... 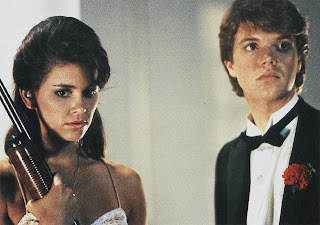 OK, so it sounds like this is the worst movie in the world but it's not.  As a DELIBERATE attempt at a B-movie, particularly one that lampoons zombie, alien invasion AND slasher films, it does a good job.  It's a hell of a lot better than Scary Movie, I'll tell you that much.  This is Slither only not as slick production-wise and without the depth of plot.

It DOES, maybe, take someone who's more versed in the other genres AND has a bit of Film Noir knowledge to get some of the in-jokes in the dialogue but it's still enjoyable even if you just shut off your brain and groan at the creaky, old plot.

Much like Cabin in the Woods, this is one of those movies where you get to play "Count the Tropes" and I appreciate that.  Plus, having grown up during the 80s, I saw a LOT of those Sugarbaker-Sister taffeta monstrosities they're calling "formal gowns" in this movie and I could practically smell the Aqua-Net in those hairdos.  Those right there are worth the price of admission.

This is perfect if you're bored or if you want to have a B-Movie party.

Trivia note:  The setting and many of the major characters are named after Horror directors.  I'll let you figure them out for yourself.

And, yes, there is ONE reference to Stryper in the movie.  Try and find it.
Posted by BobSmash at 12:45 AM