You Gonna Eat That?

Reaganomics and rampant consumerism.  Stocks are high, yuppies are breeding like rabbits and everybody wants the newest, bestest, most shiny toys.  Kids are playing with Super Mario Bros., She-Ra, Teddy Ruxpin and My Buddy dolls.  Michael J. Fox introduced us to the flux capacitor and The Goonies searched for sunken treasure.  That plastic thingie that keeps the pizza box from sticking to the pizza was invented, people were wondering if Maddie and David were going to hook up and Bartles and James are thanking us for our support.

And Larry Cohen brings us The Stuff. 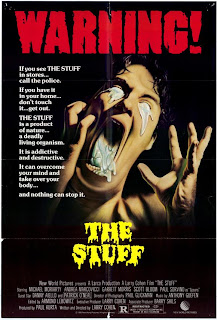 Much like The Blob, The Stuff starts with an idiotic old man finding goo.  Unlike in The Blob, though, the old dude is stupid enough to put something that he found on the ground in his mouth.  Turns out the white paste is tasty so he and his buddy decide to sell it.  I'm not sure how they managed that since they didn't own the land that it was found on, but, hey.  Movie logic.  It soon becomes the newest Fad Food with slick marketing campaigns and jingles and such.  Because this is the 80s.

The fur is supposed to convey pretentiousness.

Enter David "Mo" Rutherford.  An ex-FBI professional industrial saboteur who really doesn't have a lick of sense in his fucking head because he actually TELLS people that's what he does.  He's hired by the failing ice cream industry and a man by the name of Chocolate Chip Charlie to take down The Stuff.  And by "take down", I mean find out what it is and kill it.

In his research, he finds out that The Stuff is actually a living thing.  It is addictive and it takes over your body from the inside, first your brain, then leaving your body an empty shell when it's done much like Jane Fonda and her aerobics.  He interviews Nicole, the woman behind the ads for The Stuff, and they hook up.  I'm still not entirely sure how that happened.  She has no problem dating a man who ruins companies for a living.  I think if you enter the advertising game the first thing they do is surgically remove your soul.


Meanwhile, there's a kid by the name of Jason who ALSO knows what's going on since he saw it moving in the fridge.  His spends the next day or so going insane in supermarkets and getting grounded. 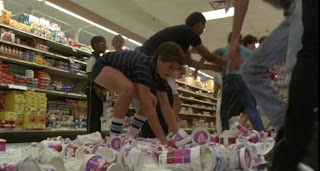 Nowadays, I'm fairly certain that this would count as terrorist activity.

Somehow, Mo manages to know exactly where to find this kid who, like an idiot, gets in the car with the complete stranger simply because he's running from his Stuff-possessed family.

Mo commits yet another felony as he transports a minor across state lines and leaves the kid on the plane while he and Nicole investigate the plant.  They don't get very far and since they're not actually paying attention to the kid, he gets attacked by The Stuff on the plane and ditches, somehow ending up at the plant and hiding inside a tanker truck... in the tank... like a moron.

Mo and Nicole get attacked by The Stuff in the hotel room that the plant manager conveniently put them in for the night.  They briefly mention Jason but they don't bother to... you know... check in on him.  They figure out that it's flammable... by dumping lamp oil on and setting it on fire WHILE IT'S ON MO'S FACE.  These people are so fucking stupid.  Damn.  (Little trivia note for you:  The motel room for this scene is the same room used for the Johnny Depp waterbed scene in A Nightmare on Elm Street.) 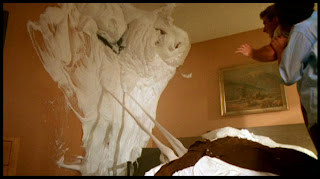 So, they escape and decide, hey, let's steal a tanker so we have some of The Stuff for testing.  Just out of pure luck, Mo hears Johnny in the tank as he's being attacked by The Stuff since they're pulling it right out of the ground.  Nicole goes back to the stolen truck they used to GET to the puddle of goo and is attacked.  She gets rescued just in the nick of time.  They get pulled over because I don't know why but we know by now that the entire town is possessed so they don't trust cops.  The cop gets distracted by The Stuff leaking and Mo takes them to a paramilitary jackhole who thinks that the issue can be solved with guns.  They infiltrate the plant and end up with a whole lot of eyewitnesses to the mobility and semi-sentience of The Stuff so they go to paramilitary dude's radio station to make the announcement. 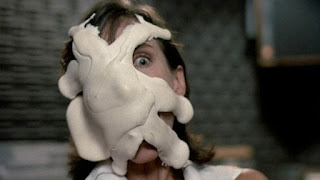 The end.
More trivia, a whole lot of Haagen-Dazs ice cream, yogurt and a lot of fire extinguishing foam was used to create The Stuff.

The Stuff is on the fence for me.
This movie is not a drinking game kind of stupid.  I LIKE my friends.  I do not wish to deal with puke and/or hospital visits.
Don't get me wrong.  This is an OK movie, for the time period, and it digs into 80s consumerism in an extremely anvilicious manner which, sometimes, isn't a bad thing.  The problem here is that it didn't reach enough people DURING the 80s to make a difference.  Also, if I had to listen to Michael Moriarty's Foghorn Leghorn accent for another second I was going to reach through my screen and slap the bejeezus out of him.  And, seriously, this movie should be a case study in how to NOT write dumbass characters.

Another issue with this movie is that it's disjointed.  Not much but enough to make me crazy.  On the other hand, there's enough fun in it to make me still recommend it to cult movie fans.  You kind of have to be a LITTLE crazy to like this movie even a little bit.  The special effects, again, for the time period, weren't bad, either.

I recommend having a party in which you play The Blob, Beware! The Blob, the 1988 remake of The Blob and The Stuff.  You should serve pudding, Jell-o, whipped cream, mousse, ice cream and yogurt.

There should be cherries involved.
Posted by BobSmash at 11:49 AM