Since 1912's The Werewolf, werewolves have had an extremely strong presence on the silver screen.  Which is strange considering their aversion to silver...

Not a lot of werewolf movies get made but, as compared to vampire flicks or slashers, whose prolific presence wears me the fuck out, sometimes, most of them are pretty good, even considering that the makeup is normally cheesy as fuck.  Even so, though, it seems that the special effects budget in werewolf movies generally guarantees a better quality film.  It's almost like the directors go, "Hmmm.  I have a metric shit ton of money that I have to spend on making a dude turn into an anthropomorphic wolf.  I had better make this shit look good or I will never have this kind of budget again."

That being said, I'm declaring this Werewolf Week.  Because I said so and you will sit down and ENJOY it, Missy.

Anyhoo.  First up?  One of my FAVORITES.  In fact, my second favorite after An American Werewolf in London. 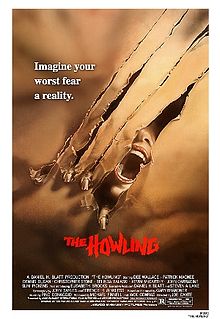 Based (extremely loosely) on the 1977 novel by Gary Brandner, Joe Dante, in one of his better turns as a director, brings us a tale of feminist media gone horribly wrong.

Karen White (Dee Wallace) is an LA news achor who's being stalked by Eddie Quist (Robert Picardo), a local serial killer.  Because she's kind of dumb, even for 1980's standards, she agrees to be bait for Quist in an extra-sleazy adult bookstore.  Quist forces her to watch a video of a rape and when she turns around to look at him she screams, he gets shot and gets away and she gets a handy case of amnesia. 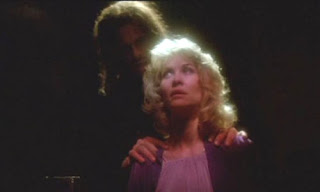 As part of her therapy, Karen gets sent to The Colony, a retreat that her therapist, George (Patrick MacNee) owns, for some west and wewaxation at wast.  There, she meets such interesting characters as the nymphomaniac, Marsha Quist (Elizabeth Brooks), which should tell you something and who immediately tries to seduce Karen's husband Bill (Christopher Stone, Wallace's real-life husband until his death in 1995).  He resists, of course, and gets bitten by a wolf for his trouble.  Payback's a bitch, I guess.

So, then he goes back and bones (I did it again) Marsha as they transform into werewolves in the corniest  animated sex scene, EVER.

So, yeah, because of Bill's bite, Karen gets her friend Terri to come to The Colony for some moral support.  Terri manages to connect The Colony to Eddie Quist via a sketch he made and left there.  Because best friends are ALWAYS forensic scientists.  Karen also turns on her wifely ESP and begins to suspect that not only is Bill cheating on her but there's a bigger secret in play, here.

And then, Terri gets attacked by Quist.  Terri manages to cut the monster's arm off and get to the main office where she places a call to her boyfriend, Chris, and tells him what's going on but gets munched on by Quist while she's on the phone.  Chris sets off for The Colony with a buttload of silver bullets.

Karen gets accosted by Quist again who transforms in front of her, which is AWESOME!!  No, seriously, this is on par with American Werewolf in London (which Rik Baker left this project to work on). 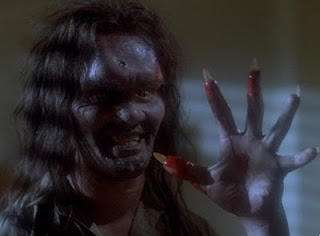 Chris manages to shoot Quist but, DUNDundunnnnnnnn, EVERYBODY in The Colony is a werewolf.  They don't need none of that "full moon" shit, neither.  They can change at will.  Karen and Chris survive and burn the camp to the ground.  I do not know if they sowed salt on the ashes.

Karen then decides to expose the truth about werewolves, because who believes that shit?  It starts like this: 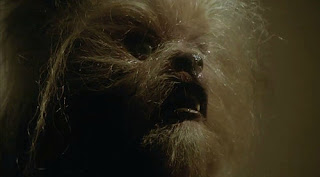 Chris shoots her, the public questions whether or not the live transformation is special effects and Marsha is revealed to have survived and a slew of truly awful sequels are born.

As I've said before, Joe Dante is almost a master of combining comedy and horror and while this is one of his darker pieces, there's a WHOLE lot of self-referential humor in The Howling by way of background characters and character names. If you look closely, you can find the mummified grandmother from The Texas Chainsaw Massacre.

If only the rest of Dante's work was this good.  Dante just isn't consistent and that's why I have a problem with him.  He's directed some of my favorites but he's also directed some real barkers (snrk).

Anyway, this movie is one of my favorites for a reason.  It's slick and funny and it kind of embraces its silliness.  Dee Wallace isn't quite at the top of her game, here (the top being her performance in Cujo which, seriously, should have at LEAST gotten her an Oscar™ nod), but she's still pretty damn good.  The state-of-the-art werewolf transformation is delightfully gory and a whole lot of fun to watch.  Plus, that whole idea of "psychiatric retreat as werewolf pack" just tickles me pink.

If you've never seen this, SHAME ON YOU!!